A look at the history of this Western African country with a focus on globalization, politics, and economics.

Mali is a completely landlocked nation located in Northwestern Africa, with the Sahara Desert in the North and the Sahel Desert in the Southwest. The Niger River that flows through it is the hub of the economy as ships with products or people sail down it and things are traded using it, with the Senegal river in the west end. At 479,245 square miles in size it is double the size of the state of Texas and 200,000 square miles smaller than Alaska. It’s population of 20.005 million is about the population of New York which is 19.453 million, though New York is just 54,555 square miles in size. Density wise, there are 40 people per square mile. 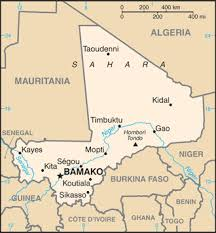 Historically, Mali was a part of the Sudanic empires of Ghana, Mali, and Songhai. The fabled city of Timbuktu is located in Mali in the northern part of the Niger River. The capital city is Bamako and the national language is French, but for many people of Mali, Bambara is the common language as are many other Mande languages. Due to the rapid growth of the capital city, many are moving out of rural areas into the city itself. There are three main religions in Mali: Sunni Islam, traditional religions, and Christianity. 94% of the people are Sunni Islam, the rest divided up between the other two.

Due to globalization, much of the country of Mali has changed. As of 2018, Mali is 57.6% rural and 42.4% urban. The people living in rural areas often live in villages of up to 600 people and their primary occupation is farming and herding sheep and cattle. Population growth has been rapid; it is estimated that 8 million more people will inhabit the nation by 2030 which is higher than the world average. Despite the rising growth of urbanization, many are unable to find work or are not being paid enough for the work they are doing. Oftentimes, many will migrate to Europe(specifically France) for better education and jobs.

As for the economy, despite the growth of globalization, much of the Malian economy is agriculturally-based. There is not much of an influence of technology or industry in Mali and what does exist is focused on processing the food that is grown there. There is so much trade of valuable goods from Western nations and Asian countries to Mali that the nation isn’t prosperous enough to pay back. This has caused the Malian national debt to grow due to its reliance on foreign help. The World Bank and International Monetary Fund has helped Mali often in trying to lower its debt “The country benefited from several debt-relief plans in the 1990s and 2000s, including the 2005 IMF plan that canceled 100 percent of Mali’s debt to that organization” (Britannica). Though it is events like this that have allowed Mali to grow, they are still heavily reliant on foreign help, not able to truly stand as an independent nation.

Despite the slow growth of industry in Mali, the influence of electricity is growing in the country, specifically hydroelectric power, “…the world’s first commercial solar-power station was established at Diré”(Britannica). Despite the growth of electricity, telephones are very limited throughout the country, mobile phones having more success than landlines. Mali is part of the West African Economic and Monetary Union, meaning that it shares the same bank with various other nations, integrating much of the economy between these various countries. They even have a national airline that operates both domestic and international flights.

As compared with other African countries, Mali has gone through various governmental systems since its independence in 1960. At first they had a parliamentary democracy with a constitution, but that was soon stopped when a military government took control and a new constitution was created. Other constitutions have been written over the decades, but it was a military coup in 2012 that truly created a new one. But, due to the involvement of the Economic Community of West African States, this was reversed as the country went back to the 1992 constitution, a newly elected president being put into place in 2013. There are even foreign troops in Mali from France and the UN due to the switch between governments. The interference and success of the Economic Community of West African States, French military, and UN peacekeeping operations shows the strong global influence on Mali, especially by nations in the region.

As for the set up of the government, it is very similar to the American Democratic System. It has eight regions that are practically states with governors, regions that break down into ‘cercles’ and arrondissements, though arrondissements are led by village chiefs and councils. They even have an army, a police force, and a court system with a Supreme Court. Malian’s have the right to vote as adults regardless of gender and women have occasionally been elected into political positions, changing the Malian cultural and traditional roles between genders. In terms of healthcare, Mali is lacking in resources, creating high levels of child and infant deaths; different International Relief Organizations have worked to change these statistics, but lack the ability to truly cultivate their medical facilities locations. In terms of housing: “Malian towns exhibit an eclectic mix of styles, including mud huts, concrete houses, European-style villas, and mosques and government buildings in the Sudanese style”(Britannica), showing a mostly traditional living environment with a slow change to more global-based living spaces. Language is an interesting part of Mali as French has been the national language, but is slowly being overturned as not many people in Mali speak it as other local languages have been introduced to Malian schools. There has been an active push for past traditions, many schools reforming so as to teach areas such as farming on top of usual subjects like math.

Mali is in a complicated situation in terms of staying with tradition and changing due to globalization, as shown above with its economic, political, and cultural situation. They have been able to stay as an agriculturally-based economy, despite the growing global influence in Mali’s economy. Trade wise, they are heavily dependent on the imports of Western and Asian countries, their economic system also controlled by other West African countries. Politically, Mali has gone through many upheavals and due to this much of their governmental actions have been controlled by foreign countries, further hindering its independence. There has also been a change culturally in terms of gender roles, what occurs healthcare wise, and lessons in schools. Despite all of this, regional and local Mali has shown a bewildering ability to stay with traditional ideas of rural and agricultural society, not adapting much to industrial systems, technology, or language. Mali is truly a country made up of various traditional and cultural systems and globalized processes.